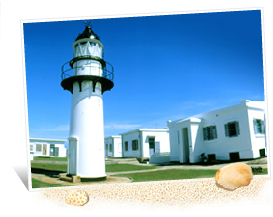 Yuwengdao Lighthouse was originally named "Siyu Lighthouse", situated on the southwest highland of Yuwongdao in Waian Village, Siyu Township in Penghu Islands. Yuwongdao was originally named "Siyin", in the 16th century, the Dutch renamed it "The island of Yuwong (fishermen)", measured 17.8380km2 in area and 52m in altitude, it is one of the three largest islands in Penghu Islands, along with Penghu Island and Baisha Island. Since it is relatively taller than surrounding islets, it became an important indication of shipping route between Taiwan, Fukien and Amoy since 300 years ago.

Yuwengdao Lighthouse is seated on a granite foundation, the base diameter is approximately 2.5m, with the tower itself coming in slightly towards the top, the ratio of tower top and tower height is 1:2. There is a spiral staircase inside the lighthouse; the upper level is an arch cast iron light screen and a weathercock. There is a cast iron working platform surrounded by iron poles outside the lighthouse, at the height of 6.3m; the lighthouse itself is 11m tall, and the light it 60.7m tall.

The western house next to the lighthouse is built with stone bricks, divided into two levels on the inside. The roof adopts the lower four-sided roofing gradient method, where the horizontal feet of the roofing protrude into the small hallway at the entrance; the blinders are French-styled, all giving off a strong sense of European style architecture. Yuwengdao Lighthouse has a fog signal, three cast iron fog cannons built in the mid Ch’ing Dynasty, and a warning campfire mound left behind from the early days.