Origin of the stone weir

The "Stone weir Oceanic Culture" is unique to Penghu Islands, and has become one of the most important fishing village experience event. The stone weir is like a floating "Eight Battle-Arrays Graph" (ancient battle arrays composed of sky, earth, wind, cloud, dragon, tiger, bird and snake)

built by forefathers in Penghu, and it has become a permanent landmark in Penghu, the feature people in Penghu are most proud of. Combined with tourism resources, the "Making Stone Weir Rounds Festival" allows people to learn about the eco-engineering of the stone weir, fishing methods and stone weir cultural asset preservation, so that the "Stone weir Oceanic Culture" can enjoy sustainable development. The origin and structure of the stone weir will be introduced below, and how the making stone weir rounds event takes place.

Japan, Okinawa Islands, Taiwan Penghu and few coral reef islands in the Pacific area, are the only places in the world that still practice "stone weir fishing. Among which, the stone weir culture in "Penghu area" is by far the most developed, hence, it is considered the most significant and representative fishing culture there. There are a total of 558 stone weirs in Penghu, and up to 88 of them are distributed around Jibeiyu, ranking first in Penghu.

Various natural resources are applied to construct "stone weir fishing", including develop reef landscape, tidal rang and wind power, residents use stones to built weirs in intertidal zones and attract fishes to swim into the weir for food with various seaweeds, then, using the migration feature of the fishes, the ends of the stone weirs are built in a curvy shape to keep fishes inside the weir, where people can collect fishes more easily.

Structure of the stone weir

Early Jibei residents had only primitive tools, and they could only fish by building simple curve stone weirs in shallow reef areas. Such stone weirs are semi-circles like a traditional dustpan, therefore they were locally known as "dustpan weir" or "cage pen". Going into the 20th century, with accumulated experiences and developed weir-building and fishing techniques, fishermen are able to build stone weirs in deeper waters where fish collecting can be done more effectively.

Stone weirs in deep waters mostly have a heart-shaped embankment locally known as "weir atrium" or "weir eye" in the mid-part of the weir bank. It is used to close up the waters for fish-collecting, and very few stone weirs even have two weir atriums built in, forming the so-called double-atrium stone weir. Each weir atrium needs to leave a gap for the "weir opening", so water can flow from the shallow water area into the deep water area inside the stone weir. The width of the weir opening is generally 1m in size, with a stone-paved sinking threshold (locally known as "weir anchor"), which is shallow on the outside and deepens towards the inside. Stone weirs with a weir atrium have extended stone antennas that curl inwards on both side to lure fishes into the weir atrium, and some stone antennas of large stone weirs measure up to over a thousand feet. One or two concave holes, locally known as "fish wells", are generally built where the weir atrium connects with the stone foot, so that larger fishes, which cannot be conveniently carried around, can be stored there during harvest time. 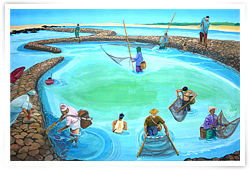 Fishing in the stone weir is generally called "making stone weir rounds", because you must first make rounds to scout for fish, before going into the water to catch the fishes. Stone weirs with an embankment, usually has a concave wide enough to fit a human body along the embankment near the gap, so that the owner can lean close to the water to observe; once fishes gather in the waters near the weir embankment, a net is immediately placed to block the entrance, and the owner goes into the waters to catch them. For stone weirs further off from the shore, a delegate is first sent to spy on the fish flood, who then notifies fellow companions waiting on shore by a "flag" (locally known as "calling flag"), and they will go into the water to round up and catch the fishes.

If anyone wishes to learn about the features and fun of the stone weir culture in depth, we recommend that you experience the "fun of making stone weir rounds" in person during the Stone Weir Culture Festival.