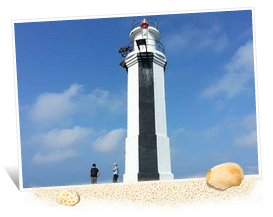 Chamuyu Lighthouse is located roughly 3.5km southeast of Lizhengjiao, Lomgmen Village in Huxi Township, Penghu County, at the easternmost point of the Penghu Archipelago. During high tide, the surface area of the island is approximately 0.0586 km2. Looking southwards from the north side of the island, it appears to be a sleeping beauty with long hair, bulging chest and belly lying on her back on the ocean surface.

Six nautical miles southeast of Chamuyu is where a treacherous submerged reef called Liuchi Reef is located. During the late Qing Dynasty, a troopship from Taiwan struck a reef and sank here.

The reef is exposed during low tide and becomes submerged during high tide, so ships often strike the reef here and sink. In 1912, planning and designing for a lighthouse was commenced; however, due to the construction difficulty and enormous expense, the lighthouse was built on Chamuyu instead. Completed in 1913, the lighthouse features an octagonal brick structure, while the height of the tower is 13.4m and the height of the light is 24.7m. The exterior is painted in vertical black and white stripes. The lighthouse was destroyed by allied bombardment during WWII, and restored in 1948 after Taiwan’s Retrocession. Equipped with class five carbide lamp with 1,200 lumens, the lighthouse flashes white light once every six seconds. In 1958, it was re-modified with an 860-lumen lamp. The automatic lighthouse features multidirectional metal radar reflectors. Since it is unmanned, it falls under the jurisdiction of the Yuwengdao Lighthouse.