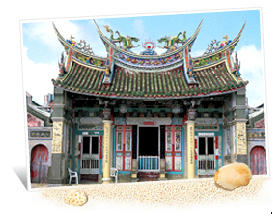 Situated in Jianshan Village in Hushi Township, the Sianji Temple is the only temple worshipping Siean. After the officer Siean from the feudal past was given godhood, he became "Sianji Deity", and was later called "Nation Protecting Deity" for his accomplishment in winning the Feishuei War. After the Ch'ing Dynasty, a temple was built to worship him, especially because the "Sie Family" continued the offering customs from the past, this is their way of showing respect to ancestors that give the family a good reputation, which also became the source of faith for residents in Jianshan Village.